Skip to main content
Posted by Jennilynn and Jeff June 24, 2012

We had quite an interesting fishing trip.  We went to the Snake River.  The girls had their own fishing poles they wanted to use.  Jeff and I got their poles ready and the girls start casting (they have been practicing).  Joelle, had a hard time getting her line out.  The hook kept snagging, then it caught into her arm, thats when the cascade of events started.  If you know Joelle, she flipped out, started screaming, crying, running around, with her pole in the river.  I was able to quickly remove the hook/worm.  Right when I did that, Leisle comes running in between us, the hook found a new home, on Liesle.  So Liesle (much like Joelle) bolts off, yes, the fishing pole is now out of the river, following Liesle.  Finally, the line snaps.  I was able to recover the hook and tie the line back together.  That was quite a drama.  I told Joelle I would cast it out for her this time.  (not like she was going to do it again)  As I did so, I felt a pain behind my ear... seriously?  Did I just do that?  I quickly removed the hook out of my head, hoping Joelle didn't notice.  While all of this was happening, we found out that Gabrielle has a fear of the dock (rocking motion).  She cried any time she wasn't being held.  If anyone saw us, between the casting, the crying and the dog...  we were quite the entertainment. 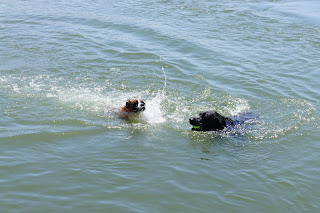 Liesle's first swim!  She is not a natural swimmer.  She kept hitching a ride on the back of this labrador.  It was funny.  I have it on video and will try to upload this later. 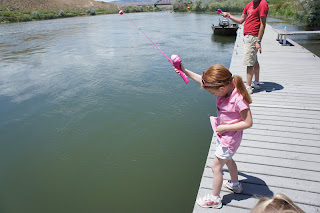 One of Joelle's snag events (before it cascaded) 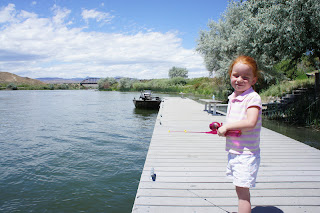 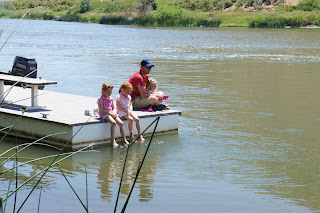 They did get a few bites, but no catch.  The girls were disappointed. 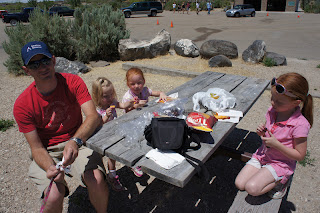