Skip to main content
Posted by Jennilynn and Jeff October 01, 2008 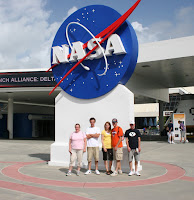 Okay many of you have been asking about the Orlando trip so I am going to put in a condensed version.

The place that we stayed at was Ginn Reunion Resort. It was a SUPER nice resort! We had our own pool house and screened in pool with a hot tub. We got it for a SUPER great deal! Cheaper than any hotel.
-Universal, Island of Adventures-My favorites were: Hulk, Spiderman, Jurassic Park, and that one water ride, which I can't remember the name. It was all very fun...with the exception of the shows. The Poseidon show was very lame!
-Air Boat ride in the everglades- Stephanie and I took advantage of this opportunity while everyone else went golfing. I know, golfing..... On the boat we saw a lot of wildlife that were foreign to me. Eagle, turkeys, crane type birds and birds that I didn't know. We were about 4000 alligators in the 10 foot lake but I didn't see them. However, we were able to hold a 3 year old alligator. In the picture you will notice that Stephanie is holding the head but no worries, he had his mouth taped shut.

-Cape Canaveral & Kennedy Space Center- Very interesting tour on launching men to the moon and satellites. We were able to see real life rockets and other space adventure shows.

-Beach- This was my first time swimming in the ocean. The water was very warm! The times that I have been to the beach on the west coast have been cold. We would run back and swim in with the waves. I loved it!

Epcot- Epcot was perfect for us, when we toured the different countries we each bought something to share/sample. My favorite food was the sauerkraut from Germany and the lamb from Morocco. I didn't like the space ride though, the spinning scared me and right when it started I wanted to get out! I am definitely not pilot material.

Water park- We played beach volley ball and swam in the lazy river and water park area. It was very relaxing.

Bahama Breeze- Great restaurant!!! Wish they had it here.
Waffle House- I personally didn't like the food that well. Plus, as rude as it sounds, it was hard to get past the oral hygiene, or the lack of it, from the workers there. The whole Waffle House chain appeared to be suspicious to me.

Public (or as David would say...) was our popular grocery store.
I may be missing a few places. You should look up Scott's blog to read up on the trip more.
Overall story is that I had a great time. It was very different for me to only have to think about myself. The Garner family are fun and they keep things very interesting!! I wonder where our next trip will be. It was very hard coming home though. I was looking forward to seeing my girls but I was also dreading what I would have to face... REALITY! I will discuss this in my next blog.

Ashley Holladay said…
Thanks for posting about your Orlando vacation! I had fun reading about it. Oh yes, and don't worry...Heavenly Father will continue to lead and guide you everyday, even though life is difficult right now. I'm always thinking about you guys.
October 2, 2008 at 11:08 AM